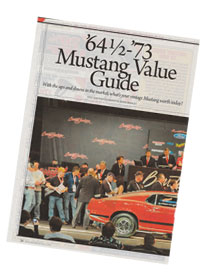 Have you been wondering just how much your hours of work have added to the value of your Mustang?  Want to know how much you can expect to pay for the 68 convertible you’ve been dreaming about since junior high? A Mustang Value Guide in the December 2012 issue of Mustang Monthly takes some of the guesswork out of appraising that perennial favorite of classic cars.

Mustangs have had a tumultuous decade as the economy shot asking prices to dizzying heights and back down again, with $50,000 Mustangs going for twice that. Now they have calmed down — witness the one-third drop in asking price for a Boss 429, which set a world record in 2007 with $605,000 and now commands closer to $400,000.

What goes into those record prices at the Bosses, Shelbys, and Cobra Jets end of the Mustang spectrum?  Thoroughbred status (OEM parts), ultra-low mileage, and pristine but unrestored conditions, among other qualities.

There’s good news for those of us whose checkbooks operate on a more earthly plane: the average, majority-type cars haven’t seen quite such a dramatic fall in value. If you had been hoping a vintage vehicle would be a better investment than real estate, a look at the info listed here should reassure you.

Listed in the guide are values for more than 200 Mustang models from 1964 1/2 to 1973, broken down by condition ratings 1-5. Included are the values for five popular options such as Pony seats, Styled Steel wheels, and, of course, air conditioning, which adds a tidy $4,000 to a Mustang’s worth.

There’s also a run-down of what constitutes each condition rating, as well as guidance on evaluating the incomplete or rust-afflicted car.

CAA makes customized Mustang air conditioning systems for all the model years listed in the Guide. Contact us today for more information about our Mustang-Cougar Perfect Fit Systems and our OEM parts and restoration services.

Sidebar
We use cookies to ensure that we give you the best experience on our website. If you continue to use this site we will assume that you are happy with it.Ok