Normally made of aluminum the condenser plays an important role in your vehicles A/C system. So what does it do? The condenser is a heat exchanger. The refrigerant passes through the condenser and it releases the heat to the atmosphere. 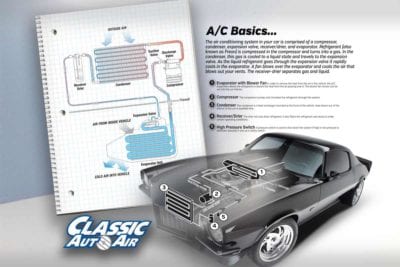 What can go wrong and what should I do?

There are things that can go wrong with the condenser externally and internally. The easiest to fix is an external blockage. More often debris such as dust, and insects can diminish the performance of the condenser. Some preventive maintenance can go a long way. Spray down the condenser with some water and even a small amount of soap to loosen and remove daily grime. If just being dirty is the problem increased performance should be noticed immediately. Another external issue is damage. Because the condenser is mounted in the front of the car it is most likely to take the impact of road debris, such as rocks.

This type of condenser consists of one long tube, which is coiled over and back on itself with cooling fins in between the tubes.

This design is very similar to a cross flow radiator Instead of refrigerant travelling through one passage (like serpentine type); it can now travel across numerous passages. This will give larger surface area for the cooler ambient air to contact.