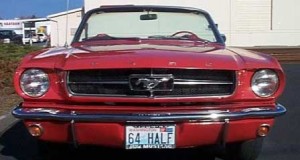 April 17 marks the 49th anniversary of the introduction of the Ford Mustang.  More than a million of them were sold in the first 24 months — still the record for the most successful new car introduction.

The first Mustangs are technically referred to as 1964 1/2 because they were released in the spring, when there was less competition from the usual fall vehicle introductions. 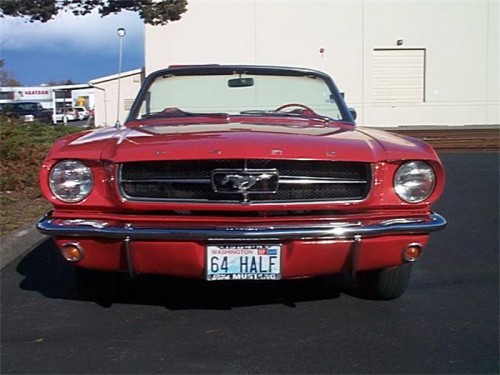 Inspired by the success of the compact Falcon, Ford saw an opportunity for a lower-priced, small, performance car and on April 17, 1964 introduced the Mustang.  Please join us in wishing this American classic a happy 48th birthday.

The spring introduction meant there was less competition from the usual fall vehicle introductions and is why the first Mustangs are technically referred to as 1964 1/2.  The Mustang was an instant hit and with over a million sold in the 1st 24 months, this iconic classic still holds the record for most successful new car introduction.  The compact, sporty, long hood-short deck design of the original Mustangs is an American classic.  The Mustang is the only car Tiffany & Co ever honored with is Award for Excellence in American Design.  Although the inline 6 was standard, almost 3/4’s of the buyers opted for one of the V8 upgrades.

Factory Air conditioning was not available on the 1964-66 Mustangs, although a dealer installed under dash system similar to Classic Auto Air’s “Daily Driver”™ was available.

While we were in Las Vegas, the SEMA folks also stopped by our booth and took the time to review our... 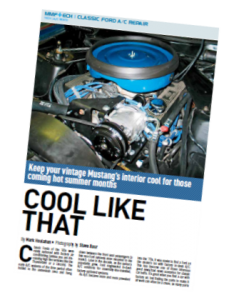 Have original AC in your car? Want to upgrade it rather than replace it?  This is what inspired Mark Houlahan’s upcoming article in Modified Mustangs& Fords.  Check it out. It is a great article (although we’re admittedly biased because we love seeing our stuff in print). 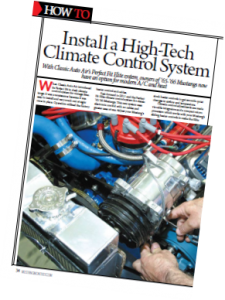 Last spring we were excited to see Jim Smart’s article explaining how to install a Perfect Fit AC system in 1965 and 1966 Mustangs.  Jim told Mustang Monthly readers that CAA’s system lived up to its name, and his article provided pictures and step-by-step installation instructions.  We thanked Jim for the props and let him in on some really cool news….as his article was hitting the streets, we were getting ready to unveil an even better system, the Perfect Fit ELITE™.

Our new ac system must have made an impression because October’s edition of Mustang Monthly features yet another ‘How To’ piece explaining how to install Classic Auto Air’s Perfect Fit ELITE System in 1965-66 Mustangs.

‘Mustang Monthly’ Gives Us Our Props in ‘How To’ Article: Installing In-Dash Air Conditioning in Your 1965 – 1966 Mustang 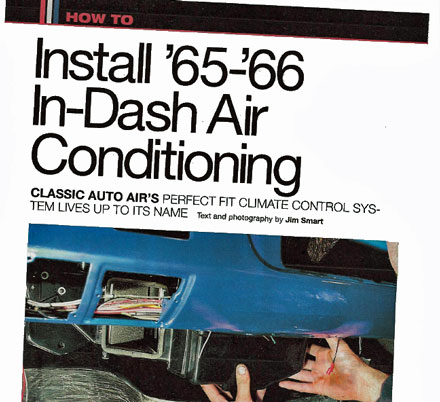 OK, so the only thing nicer than seeing our name in print in the May 2011 Mustang Monthly magazine had to be finding out that the author, Jim Smart declares that our signature Perfect Fit aftermarket AC system lives up to its name. Jim explains to MM readers that the air conditioner really does fit perfectly into the dash and engine compartment.